Association of Christian Parent-Educators of Quebec 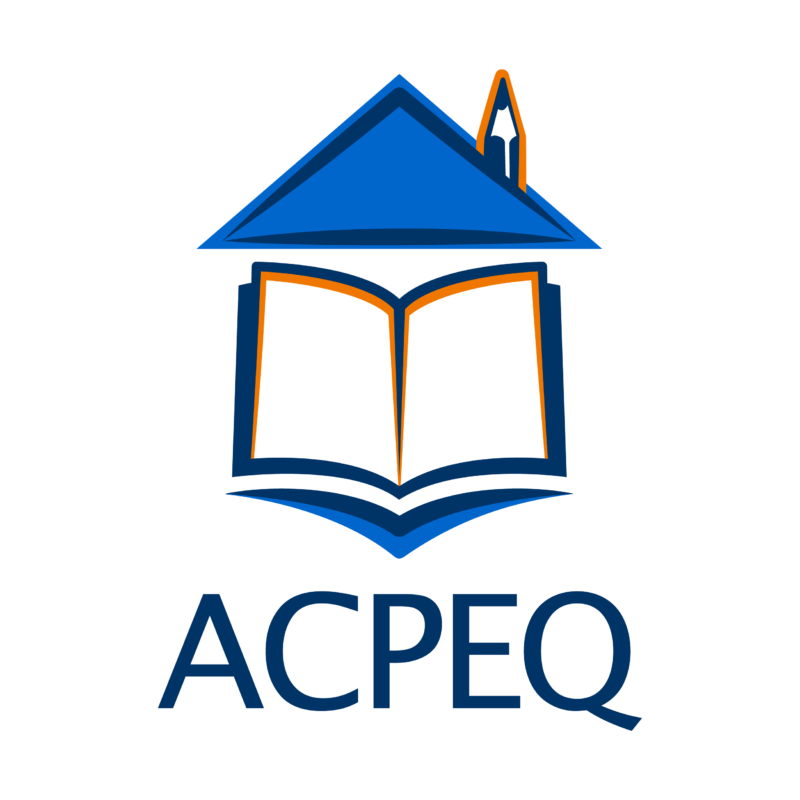 We're here for the families!

The Association of Christian Parent-Educators of Quebec (ACPEQ) is a bilingual, non-profit Christian organization whose goal is to inform, support and encourage families who have chosen to teach their children at home, or who are considering this option. ACPEQ strives to support parents in their responsibility as educators, to help them to equip their children so that they can flourish in life, excelling in the use of their gifts and talents, and thus make a difference in their community.

The ACPEQ was established in the late 1990s by a few Christian parent-educator couples. Our founding couples were these:

All these people had a common desire, that of creating an association based on Christian values, whose mission would be to represent and bring together Quebec’s parent-educators. All of them chose to put their trust in God and to work in such a way that the ACPEQ would come into existence and would endure.

THE ACPEQ was founded primarily to ensure that:

That being said, from the very beginning, the Christian Association of Parents-Educators of Quebec was open to all Quebec parent-educators, regardless of their belief, as long as they could accept, and respect, that this association was based on Christian values, and led by believers. It is in order for this aspect of the ACPEQ to be fully apparent that Mr. Michel Cardinal, one of our founders, was very keen to make the term “Christian” part of the official name of the association.

In 1998, our first conference was held. This annual conference brings Quebec’s parents-educators together in one place, giving them the chance to meet and share their home-school experience in a fraternal climate.

It was at this first conference that the bases of the support groups were set up. Mr. Michel Cardinal asked each member to raise their hands, depending on where they came from. People from the same region were able to identify with each other and form groups.

Glory to God! This was in response to the need for socialization between school-home families! They could thus meet with each other on a more regular basis, in a context respectful of Christian values! Group leaders were also selected to serve as a communication link between the Board and ACPEQ members, and to take charge of organizing support group meetings.

To ensure that support group leaders and Board members remain on track, an annual leaders’ day was also set up. It still exists today and is very useful for the smooth running of the Association and for the good communication between the Board and its members.

In a different vein, the ACPEQ has also done a great deal of work to represent the interests of parent educators in the various government bodies. The ACPEQ Board of Directors was tasked with obtaining hearings from key members of the government to publicize the association and advocate for laws that favoured homeschooling.

To accomplish this mission, Board members frequently used Mr. Dallas, from the HSLDA, for all legal aspects. Mrs. Carole Cardinal has long served as a translator between Mr. Dallas and the members of the ACPEQ, when they had difficulties with their school boards. Mr. Dallas was regularly invited to the first conferences to explain the home school’s legal issues to all members of the association.

Since the beginning of the ACPEQ, our association has worked closely with HSLDA, which remains to this day the best legal reference for home schools. Most of our members are still members of both associations today.

Later, Mr. André Riendeau succeeded Michel Cardinal as President. The challenge at that time was to modernize the management of the ACPEQ with a new website. This site proved to be a real headache for a few years!

Then, Mr. Ivan Cyr, a Quebecer by adoption (originally from Alberta) served as president of the ACPEQ. It was during his tenure that the law and regulations on home education placed home school associations on the public stage. On this occasion, the ACPEQ appointed a spokesperson, Mr. Patrice Boileau, to work in collaboration with other home school associations and government authorities. He is tasked with promoting our way of education in Quebec and defending the principle that all regulation regarding it be “simple, flexible and at the parents choice.”

History of our logo

The bilingual nature of ACPEQ is evidenced in our logo; the name of our association and a biblical reference can be read in both official languages. In the background is a geographical representation of Quebec, where we operate. The books on the right refer to study, and, of course, to the Bible, from which a verse that inspires us is taken.

But those who hope in the Lord

will renew their strength.

they will run and not grow weary,

they will walk and not be faint.

What does this verse tell us in our family as well as our parent-educator context? Family life, just as life in general, has its challenges and difficulties. Sometimes we may be tempted to become discouraged, but our Christian faith says that God cares about us, and that in Him there is strength and confidence. Trusting in God provides us with what we need to rise above difficulties, just like the eagle that takes advantage of rising air currents to fly higher than any other bird without exhausting itself by flapping its wings.

ACPEQ’s new logo is inspired by the first one. The house in the shape of a book and the pencil in place of the chimney are, of course, a reference to study as well as to the Bible. Although the verse is no longer indicated in the logo, it is implicit. Indeed, the bird is now under the house serving as it’s base, referring to Isaiah 40:31.

But those who hope in the Lord renew their strength.
They soar like eagles;
They run and do not grow weary,
They walk and do not exhaust themselves.

The Christian foundations of the association and its members are thus represented.

We also thought it would be a good idea to simplify the logo, avoiding a lot of text. Since the name of our association is written ACPEQ in both French and English, it was not necessary to add anything to indicate bilingualism.

The colors were also chosen carefully. Two shades of blue and one shade of orange were selected for specific reasons. First, the color blue was selected for the calm, confidence, loyalty, respectability and spirituality that it inspires and which are values we hold dear. The color orange, on the other hand, refers to the energetic, warm, cheerful, changing and playful aspect that we all experience on a daily basis, as parent educators and home school families.

Finally, those who pay special attention to the roof of the house will find that the colour goes beyond the frame. Why is this? To represent a simple reality: The learning our children do in a home school situation often goes well beyond the usual school setting.

ACPEQ provides relevant information to all those interested in homeschooling: what homeschooling is, how it is accomplished in Quebec, and how to begin or continue to manage your home school. ACPEQ can also direct you to various helpful links on this subject. Given that the home-school movement in the English-speaking world is decades ahead of us, many of these links offer unilingual English resources. Aware that many of its members are French-speaking, ACPEQ also takes time to translate and present the best of these sources.

In addition, ACPEQ has a network of local support groups with which it can connect its new members. Each group operates independently, according to the objectives of the local members; some will organize group outings, science fairs, oral presentations, cooking workshops, discussion clubs, etc. ACPEQ is available to answer a variety of questions or to support groups’ needs. To join one of our support groups, click here. (insert link)

ACPEQ members also have access to information sessions, training activities or workshops, and an annual conference.

Finally, ACPEQ, in conjunction with its partners, the main one being the HSLDA, represents the interests of Quebec parent educators to the Ministère de l’Éducation et de l’Enseignement supérieur (MEES), and more specifically to the Direction de l’enseignement à la maison (DEM).

Here is a succinct list of the points that we, together with the HSLDA, are defending before the MEES for parent-educators in Quebec:

– Freedom of choice with regards to curriculum. In other words, this means that parents may freely exercise their choice of content in the instruction being provided, whether they adopt the ministry’s curriculum or not.

– Alternatives for evaluation that the vast majority of parents can agree to while remaining in compliance with the various public education laws, including Bill 144 and the regulation on homeschooling.

– Withdrawal of any threat or intervention of Youth Protection Services (Directeur de la protection de la jeunesse (DPJ)) for homeschooling families where it is a question of administrative procedures with the school board.

ACPEQ’s philosophy represents the very foundation that guides all of the Association’s actions and decisions. On the one hand, ACPEQ draws its philosophy from the Christian home-school movement, based on certain biblical principles, such as these well-known verses from Deuteronomy 6:6-7 (NIV) .

These commandments that I give you today are to be on your hearts.  Impress them on your children. Talk about them when you sit at home and when you walk along the road, when you lie down and when you get up.

In Christian educational circles, these verses are commonly interpreted as showing that education is the responsibility of parents, all of the time and everywhere.

On the other hand, ACPEQ’s philosophy is based on the legal traditions, known for centuries, on which our current laws are based, which place the family institution and authority as the foundation of society. For example, let us simply mention our Civil Code, article 599: The father and mother have the rights and duties of custody, supervision and education of their children.

In concrete terms, this translates into the following philosophy for ACPEQ:

Our ACPEQ volunteers will support you in your ventures, encourage your support groups, facilitate networking between parent-educators, etc., but we cannot provide the legal support and expertise that HSLDA offers. This is why ACPEQ (Association of Christian Parent-Educators of Quebec) is affiliated with HSLDA (Home School Legal Defense Association), our main partner.

We strongly recommend that our members and all those who wish to home school become members of HSLDA. Choosing a lesser-known educational path presents its own challenges, and there have been times when parent-educators have had to make their legal rights recognized. In recent years in Quebec, the laws surrounding home-schooling have been modified significantly, and it is still possible that more changes may occur.

To keep yourselves well informed of your legal rights and obligations, to receive the most up to date legal advice, and to benefit from a team of seasoned lawyers in this field, HSLDA offers you the advantage of a long experience in defending the rights of parent-educators across Canada. In reality, HSLDA is the only organization in Canada with the legal expertise to represent home-school families who are in conflict with school boards, social services or government agencies.